Brands jump on the Game of Thrones® bandwagon

I’ll be honest, I haven’t watched Game of Thrones®, which is much to the disappointment of my Creo colleagues Bryn and Shaun.

However, given the hundreds of Memes and tweets I’ve seen in relation to the HBO smash hit, I’m already familiar with half of the characters and the plot. In fact, I reckon you’d be hard-pressed to find anyone who hasn’t at least heard of it.

So, with the first episode of the eighth and final season airing today, it’s no surprise that companies across the globe have been quick to jump on the bandwagon and boost their brand profile. Here are just a few of our favourite examples…

Tourism Ireland is installing six Game of Thrones® themed stained-glass windows across Belfast in a bid to encourage fans to visit the country where much of the world’s most popular TV show was filmed.

Timed to coincide with the eighth and final season, the campaign – called ‘Glass of Thrones’ – has been created by Tourism Ireland and Tourism NI in partnership with HBO.

It kicks off today (April 15th) and will roll out to millions of fans in ten markets – including Great Britain, the United States, Canada, Australia, France, Germany, Spain, Italy, the Netherlands and Scandinavia. It will also be rolled out by Tourism NI in Northern Ireland and the Republic of Ireland. 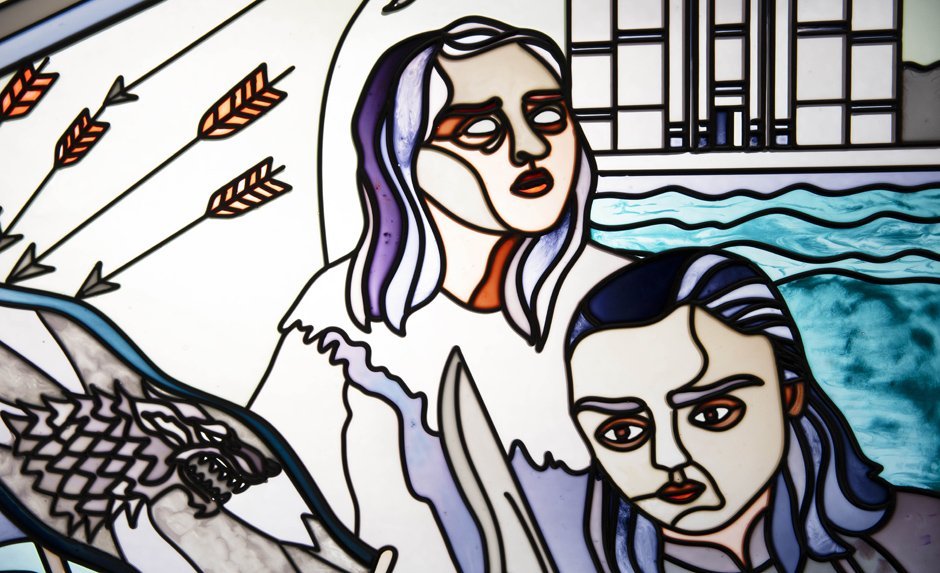 Announced in February 2019, Mondelez (the parent company of OREO UK), announced that its BIGGEST EVER PARTNERSHIP would see it bring a batch of limited edition OREO cookies to market featuring four unique embossments that pay homage to Game of Thrones.

The campaign delivers a playful new take on the original cookie, with each pack featuring four unique embossments on top of the chocolate wafers that represent: House Lannister, House Targaryen, House Stark and The Night King.

Fans were then encouraged to pledge their loyalty to either House Stark, House Targaryen, House Lannister or The Night King by using the #GameofCookies and #ForTheThrone, or by visiting Oreo’s website.

Also, to promote the campaign, Mondelez worked alongside show producer HBO and advertising agency 360i to create a new version of the show’s opening trailer composed entirely out of Oreos – more than 2,750 of them!

A Can Has No Name

American soft drink brand Mountain Dew has capitalised on the GoT finale by releasing limited-edition cans inspired by the show.

Focusing on one of the show’s most popular characters, Arya Stark, the brand has produced a range of unbranded white cans, which, when cooled, reveal Arya’s kill list. However, there’s a catch.

The cans are so limited that they can’t be bought and fans are being asked to tweet Mountain Dew using the hashtags #ACanHasNoName, #ForTheThrone and #MTNDEWsweepstakes to tell the brand what they would sacrifice to have one of the special cans sent to them.

Spotted any other great GoT themed campaigns? Tweet us at @WeAreCreo with your favourites!

This website uses cookies to improve your experience while you navigate through the website. Out of these, the cookies that are categorized as necessary are stored on your browser as they are essential for the working of basic functionalities of the website. We also use third-party cookies that help us analyze and understand how you use this website. These cookies will be stored in your browser only with your consent. You also have the option to opt-out of these cookies. But opting out of some of these cookies may affect your browsing experience.
Necessary Always Enabled
Necessary cookies are absolutely essential for the website to function properly. These cookies ensure basic functionalities and security features of the website, anonymously.
Functional
Functional cookies help to perform certain functionalities like sharing the content of the website on social media platforms, collect feedbacks, and other third-party features.
Performance
Performance cookies are used to understand and analyze the key performance indexes of the website which helps in delivering a better user experience for the visitors.
Analytics
Analytical cookies are used to understand how visitors interact with the website. These cookies help provide information on metrics the number of visitors, bounce rate, traffic source, etc.
Advertisement
Advertisement cookies are used to provide visitors with relevant ads and marketing campaigns. These cookies track visitors across websites and collect information to provide customized ads.
Others
Other uncategorized cookies are those that are being analyzed and have not been classified into a category as yet.
SAVE & ACCEPT